Join Covenant? refers to a series of photoshops parodying the Covenant mechanic in the Dark Souls series of video games. In Dark Souls, players meet NPCs who offer to have the player join their covenant, with each covenant affecting the online play experience. Upon the NPC asking, a prompt will appear on screen reading, “Join Covenant? (Abandons former Covenant).” These NPCs can often be various animals and creatures with bizarre designs. In parodies, the people photoshop the prompt onto pictures of animals or creatures in strange situations or outfits.

In Dark Souls, players will meet various NPCs who will offer to have the player join their Covenant. Covenants offer the player different online experiences, with each covenant opening the player up to various PvP battles. NPCs offering covenants can be found throughout the game world and often non-human and bizarre-looking, such as Alvina the Cat and the Daughter of Chaos (shown below).

The earliest known parody to use the “Join Covenant?” prompt was posted April 23rd, 2018 to /r/shittydarksouls by user Gohomeurdrunk, who applied it in a Prequel Meme, gaining over 690 points (shown below).

Over the following years, the “Join Covenant” prompt would be applied to a variety of pictures, particularly of animals. On September 16th, 2018, Facebook page “Dark Souls & Bloodborne things, humanity restored” posted a picture of a cat with the prompt, parodying Alvina, gaining over 2,900 reactions and 1,700 shares (shown below, left). On April 26th, 2019, Telegram user eternal classic posted another cat picture with the prompt, gaining over 10,000 views (shown below, right). 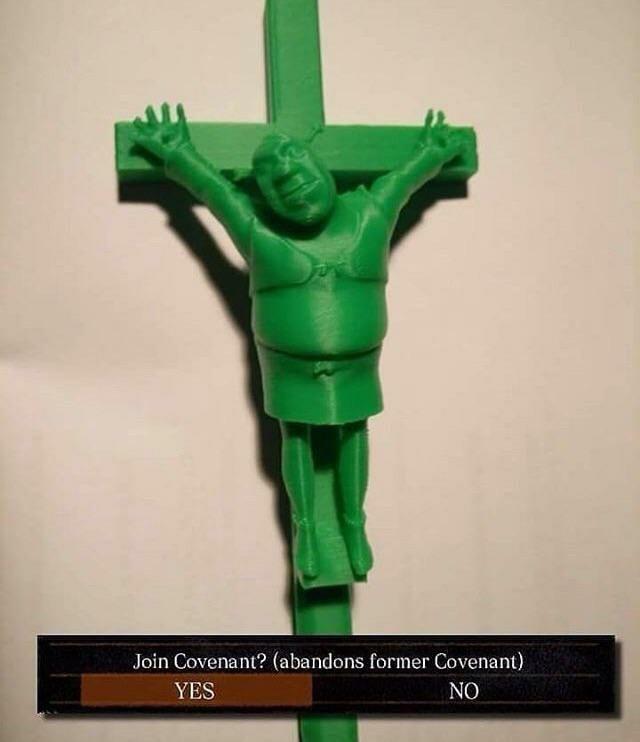