Hidden Talent of Mine? Making Babies Laugh, also known as Guy Lunges at Camera, refers to a viral TikTok by user macpeepeepoopoo in which he tells that making babies laugh is his hidden talent, and then proceeds to repeatedly lunge at the screen while maintaining a frightening grimace. Following the viral spread of the video, it gained popularity in GIF captions and other memes.

On August 11th, 2020, TikTok user macpeepeepoopoo posted a humorous video in which he claimed that making babies laugh was his hidden talent, challenging parent users to duet with him. In the second part of the video, macpeepeepoopoo, with water splashed upon his face as to give him an unhealthy look, makes a frightening grimace and repeatedly lunges at the camera, as if to scare a baby who might be watching the video. The post received over 10.7 million views, 1.6 million likes and 125,200 shares in three months (shown below).

Hidden talent of mine? Making babies laugh. I never fail, so please, duet this with your baby, and I can make them laugh.

The same facial expression has been used by macpeepeepoopoo in a number of his other popular videos.

Starting on August 11th, 2020, the video gained popularity in duets on TikTok, with users showing the video to their children and younger siblings. For example, on that day, TikTok user yungleandad posted one of the earliest such duets, gaining over 227,800 likes in three months (shown below, left). On August 12th, TikTok user simbakamwendo made a post that received over 243,200 likes in the same period (shown below, center). A duet posted by user lolaspeaks_ on August 18th gained over 1.5 million likes (shown below, right).

In the following months, the GIF maintained moderate popularity on iFunny and Twitter, with a still image of macpeepeepoopoo’s face also being used in memes. 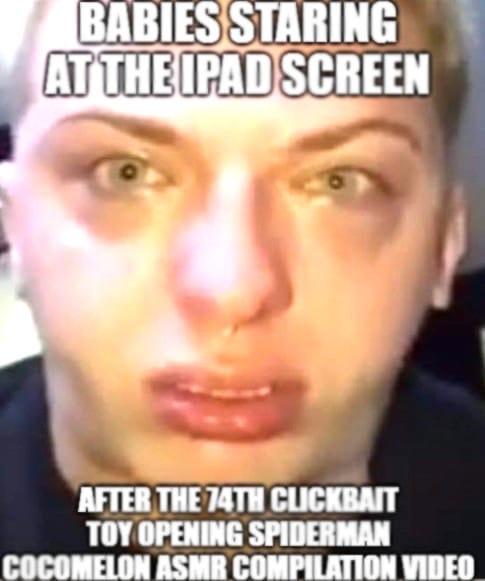