Dr. Doofenshmirtz’ “If I Had A Nickel” refers to a line of dialogue by Heinz Doofenshmirtz in the 2011 movie Phineas and Ferb the Movie: Across the 2nd Dimension. The scene gained popularity both as a quote and as a template, used to refer to improbable events that nonetheless happened two times in recorded history.

The line in the movie is a parody of the widespread English expression: “If I had a nickel for every time [X happened], I’d be rich,” which is used to express the large reoccurrence of a situation or an event. This model of expression was most likely coined by Mark Twain: “If I had a dollar for every person killed per year in India [by snake-bite], I would rather have it than any other property” is a famous quote from his 1809 book Following the Equator. There are several versions of the expression, and there are several parodies of it serving as subverted tropes to talk about, on the opposite side of the spectrum, events that happened only once, or never at all.

In Phineas and Ferb the Movie: Across the 2nd Dimension, the comedic antagonist Dr. Doofenshmirtz is double-crossed by his evil clone, who “dooms” him via the use of a hand puppet. Dr Doofenshmirtz reacts to this by saying: “Wow! If I had a nickel for every time I was doomed by a puppet, I’d have two nickels. Which isn’t a lot, but it’s weird that it happened twice. Right?” This is part of a running gag in the series, where he reveals surreal anecdotes as a part of his tragic backstory.

This line was uploaded on Quickmeme as part of a reaction image as soon as August 9th, 2011, captioned on an unrelated screenshot of Dr. Doofenshmirtz. The first version of the template that uses the movie’s screenshot was uploaded on Imgur on April 24th, 2019.

The line began appearing more regularly in image macros across 2019 and 2020. While the quote is a famous one among the Phineas and Ferb fandom, it stuck particularly well with the Reddit community. Apart from the template edits, many threads are named after a variation on this line. Among the most popular pictures of the website, an edit on r/ShitPostCrusaders posted on March 2nd, 2020 accumulated a score of 11,300 points (99% upvotes) and 76 comments, and a fan art on r/DnD posted on September 20th, 2020 reached a score of 17,900 points (97%) and more than 150 comments in eight days. 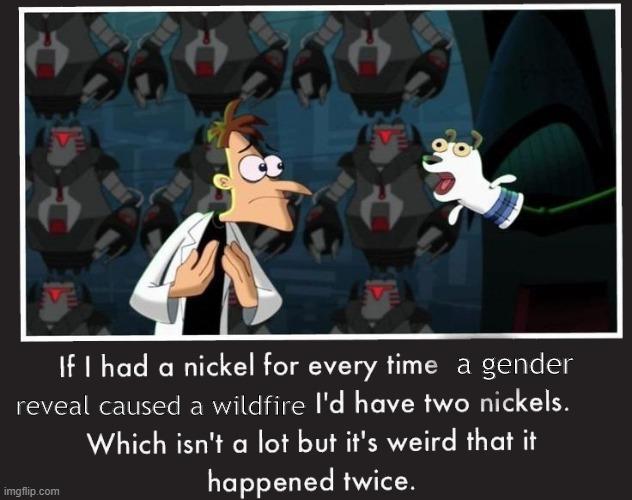